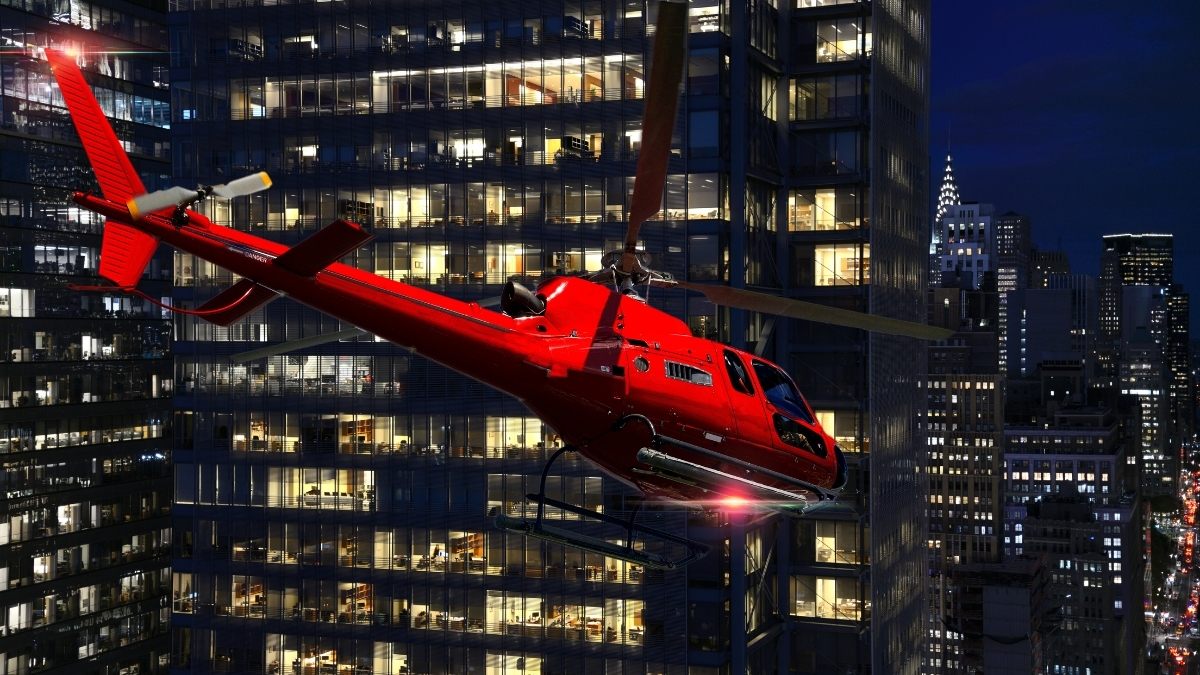 Everyone loves to experience New York City’s nightlife once in a lifetime.

Besides a night of pub-hopping, there is yet another kind of nightlife that is very popular in New York.

The one where you go up in a helicopter to see the best star-lit sky views of NYC.

Why go up in a helicopter at night

No one can doubt the sheer awesomeness of New York City at any time of day.

There is always something to see throughout the five boroughs, from the early sunrises over the East River to those sunsets over the Hudson River.

But evenings are when New York shines, though.

If you’re here for the first time, the city lights at night are something to behold and a sight you don’t want to miss.

There are countless ways to enjoy a breathtakingly beautiful New York City after the lights come on dark.

But let me tell you why the night helicopter tour in NYC is the best.

What to expect from a night helicopter tour

New York is popularly known as the “City that never sleeps!”

It is a city where with lots to do after dark.

One of the numerous possible activities is the NYC night helicopter tour, the most breathtaking activity you can go to after dark.

Avail a helicopter tour in NYC at night and hover over New York City with the delightful views of Times Square, Rockefeller Center, and the Statue of Liberty when they are illuminated.

Take a flight over one of the busiest bridges in the World, the George Washington Bridge, by selecting a departure time that works best for your schedule.

You can take your family and friends on this excursion.

There are no age limits for the helicopter tour of NYC at night so everyone can take advantage of it.

Why, despite the high cost, it is worth it

If money is an issue, you can always take the safe and sound aerial view of New York in a shared helicopter (shared experience with other travelers) with floor-to-ceiling windows, live commentary on board, and a climate-controlled cabin.

A helicopter tour is something you never regret doing.

The views from the windows of a chopper, especially when the city is lit up, are not a sight we see every day.

Trust us when we say this – it is one thing that will stand out in your vacation.

Are you thinking of a budget-friendly skyline experience?

Travel to and from NYC with an adult ticket as low as US$17 (​​roundtrip on the train from NY Penn Station via NJ Transit) and try out City Lights Skyline Experience, which takes off from New Jersey.

Or better still, just drive to the helipad.

You will depart from the Linden Airport at 1101 West Edgar Road, Linden, New Jersey 07036, USA. Get Directions

Get in your chopper once you’ve arrived at the airport.

After taking off, your pilot will fly you directly over Newark International Airport on his way to Manhattan.

View the star-lit sky of New York City at night, from Time Square to the Statue of Liberty.

On the tour booking page, you can select the departure time that works best for your schedule for this Night helicopter tour in NYC.

This romantic Helicopter tour in NYC at night is perfect if you want to elevate the romance of your NYC vacation.

On a 30-or 45-minute scenic helicopter flight over Manhattan, you can avoid the traffic and enjoy breathtaking views.

Bring your special someone along on this special tour, which is priced for two people.

Tours start and end at Westchester County Airport in White Plains, New York, which is nearby NYC and easily reachable by car and public transportation (Metro-North rail) (free parking).

Alternately, decide to add return hotel transfers from any location in Manhattan.

Before boarding the helicopter at the airport, start with a safety briefing.

The Empire State and Chrysler Buildings, Central Park, Yankee Stadium, the iconic Manhattan skyline, and the East River bridges can all be seen from the air as you take off.

Admire the breathtaking sights over NYC after dark.

With no-cost cancellation, you receive a full refund if you cancel up to 24 hours beforehand.

Duration of the flight: Select from 30 or 45 minutes tour

Families and couples who want to spend more time in the air opt for the helicopter ride over Niagara Falls. These flights take off from New York City.

Impress your partner with a private helicopter tour of New York City— it’s the ideal setting for an aerial marriage proposal in the evening.

Together, you and your expert engagement photographer will plan every aspect of the 30 to 45-minute flight.

Start by having a private car pick you up from your Manhattan hotel or home.

Until you reach the airfield outside of Manhattan, you can keep the location a secret from your uninformed partner.

You can propose before takeoff, during the flight, or after landing – the decision is yours.

What will you see during the helicopter tour in NYC at night?

Chrysler Building: It is the most beloved skyscraper in the World that begins to illuminate from within at precisely 8.59 pm every night.

TriBeCa: The trendy neighborhood of Tribeca is known for its old industrial structures, many of which have been converted into loft-style homes. These structures are a delight for the eye to watch in the evening.

SoHo: It has Instagram-worthy hotels, including Williamsburg Hotel and The Ludlow. After dark, after the sun has gone down, it is a fascinating sight.

West Village: The best nightlife in the West Village isn’t just found in dance clubs; a lot of the after-hours activity happens in jazz clubs and gay hangouts.

Central Park: Masterwork in landscape design is located at the southwest corner of Central Park.

Some of the other city attractions you will see from the air are – The National 9/11 Memorial & Museum, One World Trade Center, Chelsea Piers Sports & Entertainment Complex, Intrepid Sea, Air & Space Museum, Yankee Stadium, and George Washington Bridge.