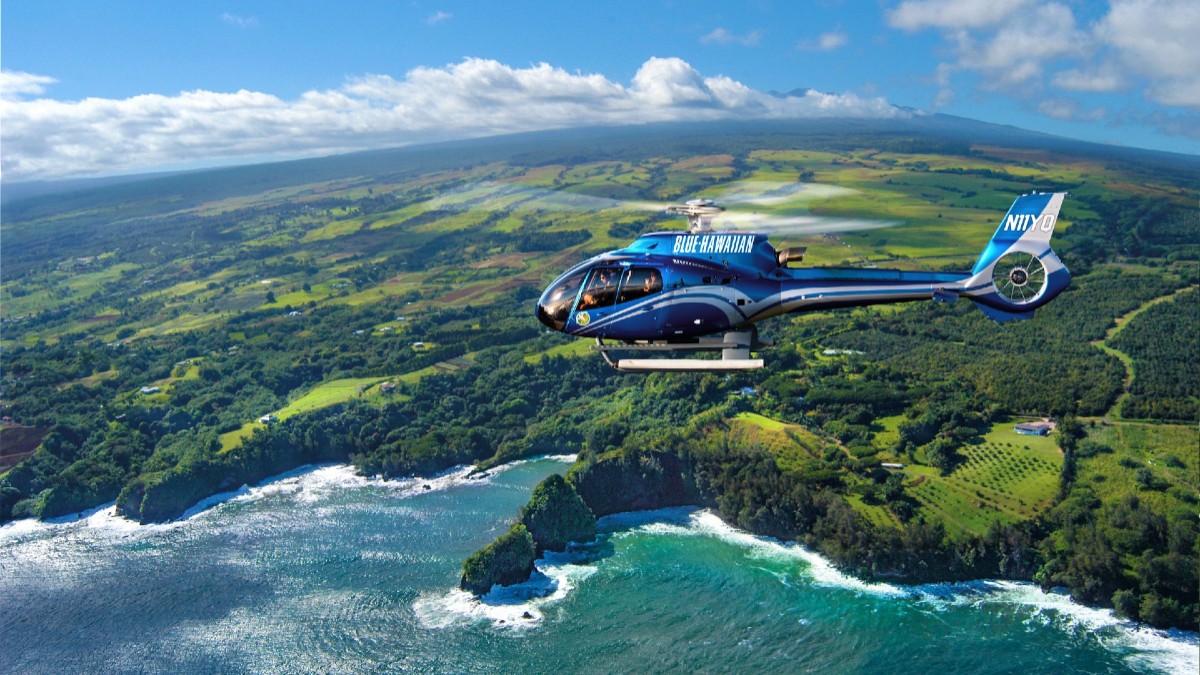 Helicopter tours on the Big Island (also known as the Hawaii Island) take off from Kailua-Kona, Hilo, and Waimea.

Since it offers better weather, beaches, snorkeling, the latest resorts, and more nightlife, most tourists prefer to stay in Kailua-Kona.

As a result, most of the helicopter tours on the Big Island take off from Kona and nearby areas.

In this article, we share the best helicopter tours in Kona, Hawaii.

The helicopter tours we have listed below take off from the heliport in Waikoloa Village or Kona International Airport.

There are multiple take-offs daily, and you are sure to get your preferred timing if you book early.

Where does the helicopter return?

After your sightseeing trip is over, you will land at the same place from where the helicopter took off.

Before we share our selection of the best helicopter tours in Kona, Hawaii, check out these important instructions for all travelers –

This helicopter tour of the Big Island takes you above Hawaii’s stunning peaks, beaches, and valleys.

View lava flowing from volcanoes, fly over the lush rain forests of the Hamakua Coast and end your journey with views of the Kohala Mountains’ waterfalls.

Only a helicopter tour allows you to see so many of Hawaii’s attractions in one trip and from such a unique vantage point.

You can choose an 8 am departure or a 1.30 pm afternoon take-off.

You get treated like a VIP on this tour because it is a private 4-passenger helicopter tour of the Big Island from Kona.

Departing from Kona International Airport, take your Hawaii vacation to the sky.

You will head straight to Kilauea via the saddle running between Mauna Kea and Mauna Loa, Hawaii’s tallest mountains.

Experience the breathtaking scenery of Hawaii’s Big Island from the air, the way it was designed to be seen.

While soaking up stunning airborne views of the smoldering Kilauea Volcano and the magnificent mountains and sea cliffs of the Kohala Coast, listen to expert narration from your pilot.

Land on a remote rarely visited section of the island and explore the quiet tropical paradise.

After you have had your fill, climb back aboard the helicopter to continue your flying tour of Hawaii’s natural landmarks.

Duration in the air: Three hours

This trip is the best helicopter tour to explore Kona Coast from the air.

You will fly from Kona Airport (Southbound) past Honokohau Bay, Kona Town, Keauhou to the famous Captain Cook or (Northbound) to the famous Kua Bay, Kiholo Bay, Hapuna Beach, and Kawaihae.

This heli tour gets even more popular during the whale season because you get to spot whales from the top.

Duration in the air: 30 minutes

The Circle Island Helicopter tour is an excellent way to see Big Island from the air if you stay in or around Kailua-Kona.

On this deluxe, two-hour helicopter tour of the Big Island, you’ll take off from Kona and fly above newly created black sand beaches, spectacular waterfalls along the coastline, and over the Waipio and Waimanu valleys.

You will also soar above rainforests, macadamia nut orchards, and live volcanoes.

The Bell 407 helicopter has executive seating and sliding windows, making snapping pictures of flowing lava and secret waterfalls much easier.

Many consider this area to have the most spectacular scenery on the Big Island.

The towering sea cliffs open into the dramatically deep and meandering valleys of the Kohala Mountains.

Beautiful waterfalls cascade thousands of feet into the rainforest below, and remnants of ancient Hawaiian settlements are still visible.

Duration in the air: 45 minutes

This VIP helicopter tour starts when you get picked from your hotel and transported to the Kona airport.

At the airport, you enjoy your Champagne toast and also receive a fresh flower lei before boarding the state-of-the-art helicopter.

You soar above fields of jet-black lava outside Kona, which are punctuated by hidden, white beaches and impressively turquoise coves.

Then you see the pastures on the slopes of southern Kohala, which slowly turn into the verdant rainforest of the Hamakua Coast.

Then you will fly past snowcapped Mauna Kea en route to Hawaii Volcanoes National Park and the famous Kilauea volcano.

Since by now the light would have faded, you will see the scary orange glow of Halema’uma’u Crater, which houses a bubbling lava lake a few feet below the surface.

The helicopter then flies south towards the island’s southern tip to reach the black-sand beaches of Punalu’u Beach Park.

Soon you spot Papakolea, the famous green beach, before circling back north above the city of refuge at Pu’uhonua o Honaunau.

When your helicopter reaches Kealakekua Bay, the sun will be setting on the western horizon, giving you a dazzling display of nature’s beauty.

If you want the aerial sunset experience from Kona, but at a lesser cost, try the Big Island Sunset Flight. For just $685 per person, you will take off on a Cessna plane, catch the night’s first stars, and touch back down in Kailua-Kona after two hours.

This flight takes off from Kona Airport, and you fly along the island’s magnificent coastline during the ‘Golden Hour.’

When the sun sets, you get to see the vast array of reds, orange, purple and gold colors appearing in the sky.

If you are lucky, you will also see the ‘Green Flash,’ a natural miracle when two optical phenomena combine – a mirage and the dispersion of sunlight.

Duration in the air: 30 minutes

Big Island is home to some of the most stunning waterfalls in all of Hawaii.

Upon departing from Kona International Airport, the tour first takes you to the seven windward valleys of Kohala.

Over the next one hour and 15 minutes, you will see all of the best waterfalls on the island.

Duration in the air: One hour 15 minutes